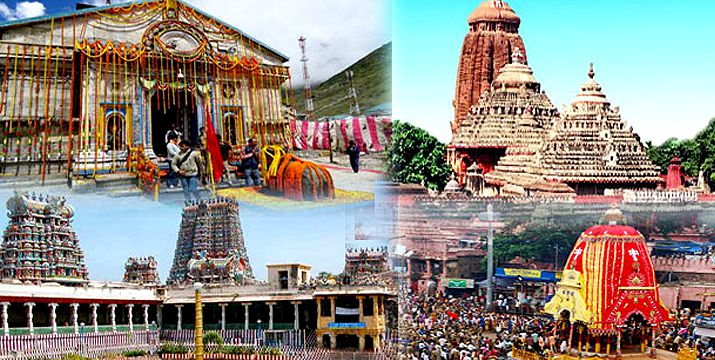 
The Char Dham as prescribed in the Hindu mythology are – Badrinath, Rameshwaram, Dwarka and Puri. It is believed that in order to attain Moksha, one must visit these 4 cites in one’s lifetime. It cleans all the sins one commits in their lives.

Badrinath is composed of badri(berries) and nath(god). It is derived from the times when Lord Vishnu did tapasya under the berry tree. It is believed that the tree grew very big in order to protect him from the sun and the rains. This tree was actually an incarnation of Goddess Laxmi. Hence the Lord blessed the tree saying that, people will always worship the tree before him, hence the phrase “laxmi narayan” cam einto being.

Rameshwaram is the second dham that came into existence in the Tretha Yug. The word Rameshwaram is derived from “Rama’s Lord”. The significance of this temple is that Lord Rama built a Shiva Lingam here in order to please Lord Shiva.

Dwarka is the third Dham that came into being in the Dwapar Yug. its significance increased manifolds when Lord Krishna made Dwarka his residence instead of his birth-place, Mathura.

Puri is the fourth Dham in the Hindu mythology. It is related to Lord Vishnu wherein he is worshipped in the form of Lord Jagannath which stands for the ‘God of the worlds”.